The Wong way to a culinary success

From donning two hats to hosting celebrities such as Kimye and now to tackling a weekend yum cha menu, it’s hard to find a flaw in the ever so right Mr Wong.

Executive Chef,Dan Hong is Merivale’s secret weapon, and has been instrumental to the design and implementation of a number of new eateries in recent years. From the Asian inspired Ms G’s to a little taste of Mexico known as El Loco, Dan simply has a talent for making food taste delicious.

Dan’s proudest achievement to date is the modern and funky Ms G’s. Part of the Merivale family of eating venues, this popular eatery sprung up in December 2010 and has already received one hat from the S MH Good Food Guide.

“It’s my baby, because I was there from the beginning, from concept through to creation and execution. The menu is Asian inspired and a reflection of Jowett Yu (Head Chef) and my personality, it is a mesh of our heritage and culture, and all the food we love to eat.”

Dan’s newest venture, tucked away in Bridge Lane in the heart of Sydney, the laneway once crowded with party goers of the former Tank Night Club is now home to Mr Wong. The restaurant’s entrance is an arched doorway framed by rustic brickwork and an understated sign in Chinese calligraphy. The interior stays true to the timeless beauty of the Australian Colonial style heritage building, with exposed wooden beams and brickwork set off by aged timber flooring and tiled inlay.

The Cantonese-style menu took 6 months of planning and testing; it pays homage to classic Chinese dishes but transcends with the use of European cooking techniques and modern interpretation. Dan gets many of his ideas from frequent travels to Asia. “A lot of my inspirations are from street vendors actually, they’re usually the most authentic with recipes passed on from one generation to another.

Spread over two levels, seating 240, Mr Wong is one of the largest restaurants on the North end of Sydney’s CBD. Even at this scale, the restaurant is packed night after night with queues of diners all hoping to score a table and get a taste of Dan’s latest creations. 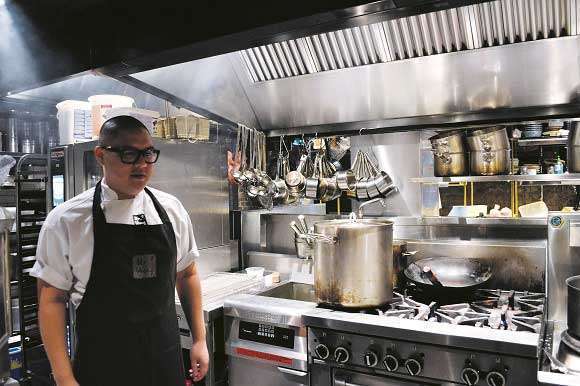 With a venue this size, there is always a kitchen to match. Fitted with high performance, high quality cooking equipment, Mr Wong’s open kitchen is certainly impressive!

The Garland 6 burner range has the largest cooking surface on the market and exclusive “Pro Burners” for concentrated heat and power – enabling Dan’s Chefs plenty of room to multitask at peak hour. Then there’s the line up of Frymaster world class fryers, always busy with the ever so popular Salt and Pepper Calamari, with a thin crispy coat on the outside, whilst staying succulent and moist on the inside.

The RATIONAL SelfCookingCenter® combi ovens also get a workout with endless orders of the classic steamed fish fillet with ginger and shallots.

“We mainly use the RATIONAL’s for steaming, the steam from the RATIONAL is very powerful, resulting in shorter cooking times. RATIONAL ovens are also really easy to use, we have over 40 chefs at Mr Wong, so what better way to ensure consistency but to program it in the oven! Then it’s just a case of press and go.”

With the many people who have inspired Dan throughout his 10 year career, amongst all the great mentors and masters, there is no person more influential to him than his mum. “I have her to thank for what I have achieved today, she led me on the right track to finding my true calling – an undying passion for creating great food.”